A long long time ago Crackington Haven, a vertiginous fold on north Cornwall’s north coast, south west of Bude, lay at the foot of a range of mountains. A lot has changed during the 350 million years (or thereabouts) since then; the mountains have gone, the Atlantic Ocean has excavated arches and ‘hanging valleys’, and there are coffee shops as well, including one with a range of excellent apricot flapjacks.

The extent of the telluric shifts that have shaped this tiny area, known as the ‘Crackington Formation’, renowned for its slate, zinc, and wolfram (the principle ore of tungsten), is brought home to me by geologist Jane Anderson, during a short walking tour. She is one of seven geologists employed by the North Cornwall District Council whose remit is to apply lessons learnt from ancient history to land management; her knowledge and experience helped design bridges in both Crackington and Boscastle following major floods.

Jane has strawberry blonde hair, alert eyes, and an easy smile while she talks; think Julia Roberts in an anorak and wellies. A dozen or so of us would-be geologists meet her in the ‘Haven’ car park at coffee time; an assortment of cajoles, walking boots and poles. We follow Jane across the road to the pebbly beach at low tide where she begins her tour.

To our right is a wall of undulating sandstone strata, reaching up to over 700 feet, and to our left what appear to be giant sheets of rock, the dimensions of table tennis boards. These, says Jane, are  actually upside down (although I confess, I’d never thought of rocks being either one up or the other). But, 350 millions years ago, when Crackington Haven was in the middle of the Rheic Ocean, the European and African tectonic plates slammed against each other, pushing upwards and creating the mountains that have long gone, throwing unimaginable amounts of rocks over on to their backs.

At our feet are countless sandstone pebbles, nearly all criss-crossed with thin white lines, our guide explains  are quartz veins created when silica, was forced through fissures in the rocks by heated water at high pressure. The quartz veins are the residue. The small striations caused by tidal water swirling around pebbles.

We are staring at a old master of the carboniferous period (over 300 million years ago), with a scientist for a guide, unearthing its secrets; the tell-tale signs of geological evolution. Every pebble Jane holds up has a story: There are some with tiny indents; goniatites, the fossils of tiny marine animals; shale pebbles, also veined; and nodules, small rock cups, thought to have formed around shells, made from pyrite and frequently mistaken for gold.

The climax of the three hour tour is at the summit of the cliff, at the end of a narrow stepped path of flowering alexanders, gorse and wild garlic.  Gulls hang motionless at our sides, and below even lines of white topped waves wear away at the browny/orange ground beneath the topsoil. An accumulation of stones and rocks from further up the valley swept down during the last ice age. A process called ‘gelifluction’ says Jane.

The rain clouds that had threatened to ruin our walk have drawn back to reveal a clear spring morning, and an uninterrupted vista from Steppers Point, near Padstow, to Widemouth Bay. A line of coves, shingle ridges, fissures and sandstone faults.

Of course it wasn’t always like this. Two million years ago the county was six kilometers wider than it is today.

“This is an erosion coast,” says Jane,  “and we’re in the interstadial period, when the ice is retreating, and the earth is warming, and sea levels are rising. Helped along with the aid of human activity.”

We take a long last look before commencing our descent, reassured that people as level headed as Jane Anderson are looking out for all of this. 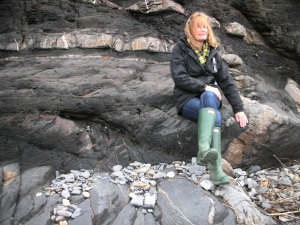 Jane has other walks  at Polzeath, Duckpool to Sandymouth, Pentire Head and Boscastle. For details go to nationaltrust.org.uk – although not the world’s most user friendly site

This entry was posted in Seashores. Bookmark the permalink.