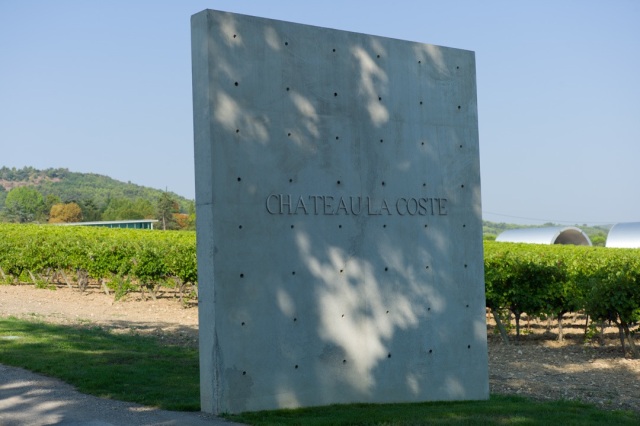 In fact, it doesn’t look like a vineyard at all, in the conventional sense. There is no clutter, no abandoned 2CV vans, or craggy men in blue overalls with lips stained amber by a lifetime of Gauloises. There are vines, fanning out like parquet flooring across a valley enclosed by green and white oaks, but there any similarity with conventional vineyards ends. 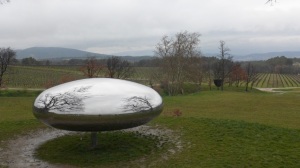 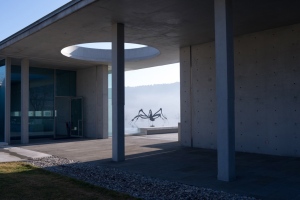 Turning into the 500 acre estate, a 20 minute drive north of Aix-en-Provence, I am confronted by two flat mid grey slabs of concrete,  one bearing the name of the chateau in sans serif lettering, that establish the fact that this is a vineyard with entirely different set of priorities. A feeling enhanced as I a pass a gigantic crouching steel spider towards a single story complex of concrete and glass, called ‘The Village’, with sublime perspectives through every angle. The entire edifice hovering above angular lakes of cobalt water.

On the other side of what turns out to be the visitor’s centre and restaurant, designed by Japanese architect Tadao Ando, past the original 17th century Venetian villa, are two large, shiny, industrial corrugated half tubes, containing the wine cuverie. Beyond these, located on hillocks, and in small oak groves, more than 20 pieces of land art and sculpture. Among them Frank Ghery’s Music Pavilion, formerly in London’s Hyde Park; a leash of foxes by Michael Stipe, the singer with REM; Tom Shannon’s Drop, a kinetic globule of polished metal hovering, and imperceptibly moving above the terrain; and through a portal in the side of a hill Andy Goldsworthy’s Stone On Wood, a silent and spellbinding subterranean cavern made from interlocking oak trunks.

Tadao Ando has also contributed pieces, including the transformation of an ancient chapel that he happened upon while surveying the property; within its meditative darkness what light there is seeps through a gap beneath the floor, and from three small holes that serve to illuminate a green glass altar.

Other sculptures and artworks are being added all the time, and in two years there will be a hotel and spa on one of the hills overlooking the entire edifice.

The person behind Chateau La Coste is litigious Irish property developer Paddy McKillen, who from a brief scan of the internet appears to spend so much time in court with one thing or another that I am loathe to say too much about him lest I put a foot wrong and find myself joining him in one.  With financial interests around the world, and by all accounts stakes in a number of London hotels, mixed media loving McKillen spurns publicity. Suffice to state his bottomless chequebook pays for everything at the chateau, while the day-to-day running of the conceptual side of the project is the job of his softly spoken sister, Mara.

But don’t make the mistake of thinking this vineyard has turned its back on its core function. The new biodynamic wine production centre,  three levels deep inside a space age cuverie designed by French architect Jean Nouvel and reminiscent of an epic James Bond film set, is managed by winemaker Matthieu Cose. A barn of a man, a rugby player, and the guiding hand behind a range of notable wines: there are whites, blending sauvignon blanc, chardonnay and vermentino; pale, characterful roses (my preferred choice the Grand Vin 2010 combining 90 per cent grenache with syrah); and inky Rhone like reds of syrah, grenache and cabernet sauvignon. Most are drinking now but Cose insists the Grand Vin 2009 red, already dark, spicy, and aromatically seductive, will be a cracker in 15 years.

All of this is open to the public. Lunch is served daily in The Village restaurant, with wine appropriate to the plate. There are wine and olive oil tours and tastings. And for the hale and hearty  a mapped, and fully annotated, two hour walks around the art installations.

This entry was posted in travel, Uncategorized. Bookmark the permalink.