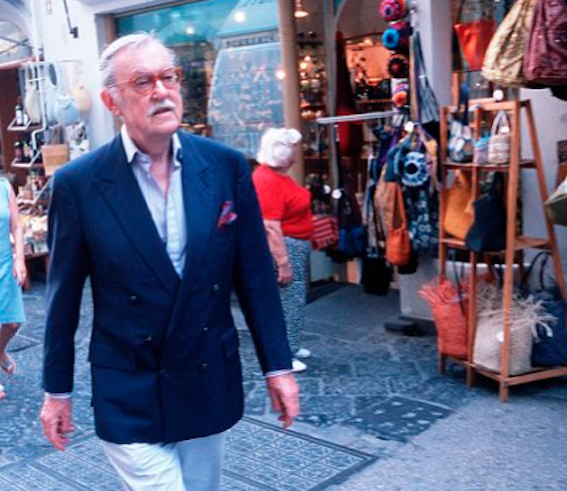 I met Alan Whicker once, a long time ago. I think it was in the sprauncy resort town of Costa Smerelda, where men wear sarongs, and there are Sunseeker launches in the bay, far north on Sardinia’s east coast.

It was a period after he’d finished doing travel films on the rich and very rich and was moving into motoring, while I was heading in the other direction; from cars to travel.

It was a pre-dinner cocktails soiree in a pleasant single story hotel with a lawn for a roof and ocean views. He was sat alone against the wall, in the middle of a line of empty chairs, cradling a plate of hor d’oeuvres. I remember thinking that he looked just like the Alan Wicker I used to watch on the tv as a boy,  easy with the people and places I could never imagine visiting. A little grey around the ears, and slightly jowly, but sharp, in grey slacks, and a blazer with a handkerchief in the breast pocket.

I can’t remember which German luxury car maker was sponsoring the trip, but you’ll get the idea if I say it was no expense spared. In the car park, beneath one of those flawless Mediterranean skies, stood a fleet of new cars, shiny, and prepped,  poured over incessantly by a small army of men in overalls. Inside a couple of dozen motoring correspondents, many from publications nobody had ever heard of, were caning the free bar and buffet like the world was about to end.

Having previously written for Elle, and later Arena, neither publication noted for their motoring expertise (I got away with writing more about the upholstery than the horsepower), and having only shortly before the trip graduated to The Observer, I didn’t really know any of the hard core car writers there. I was a consumer/style writer, the trip’s lightweight, and I recall whenever the time came to double up and take a test car for a spin, the other motoring journalists would step to one side rather than share a drive with me.

As such I was always the last to get a car. Twice PRs, out of sympathy, hopped in next to me, and one occasion I persuaded a waiter to join me, raising some eyebrows. Only once did I get a bone fide journalist to partner me. He was something of a petrol head race ace with a motorsports magazine. He must have been there for the buffet because it can’t have the motor, a puny Mazda hatchback. His name was Mike and he barely spoke a word as I piloted our car,designed for midwives and retired head teachers, around the Costa Brava in the manner of a crack head escaping the cops. At the appointed driver changeover location Mike broke his silence. Unclipping his seatbelt he looked over his sunglasses and asked, “do you always drive like that?”

That’s Alan Wicker, I said to one of the PRs, explaining what a fan I was. You should tell him came the reply. Apparently the great man often sat on his own at such do’s, a study of suave and polished elegance. I introduced myself and embarked upon a  fan’s appreciation of an idol, mindful not to go too far back in time lest he was age sensitive. How I’d been enthralled by the easy way he slipped in and out of fabulous locations, moving smoothly among the sort of people who would have holidayed there at the Aga Khan’s resort. I said how much my friends and I had enjoyed the tongue-in-cheek Barclaycard television commercials, and thanked him for my passion for brass buttoned blazers. All the while he chewed, nodded and seemed attentive.

And when I’d finished, having told him about myself and who I wrote for, he cleared his throat, and in that often impersonated although never equalled voice, seasoned with emphasis and nuance, he asked me if I would be so kind as to, pass him his drink. I think he stood up shortly after, and left.

It was a brief conversation, but for me, a memorable one.

This entry was posted in travel, Uncategorized. Bookmark the permalink.