Thank you for the kind offer of Ralph Lauren Madras cotton shorts. In fact, I think a pinafore would have been better, having spent six hours baking baguettes, pain de siegle, pain de campagne and pain aux noix, in Hubert and Anka’s bakery.

Hubert used to sell his bread at local markets, but these days – what with a bad back and the desire to retire – he only bakes twice a month, selling to friends and others who make the drive out here.

Most of my baguettes passed muster, and the pain aux noix (with walnuts and raisins, a bit like one I  bake at home) exuded an innocent charm. But I made a bit of hash of the pain de campagne. Hubert uses the sides of his hands like spatulas, forming the shapes, lifting and dropping on to the floured surface in one deft movement. Mine were less graceful. 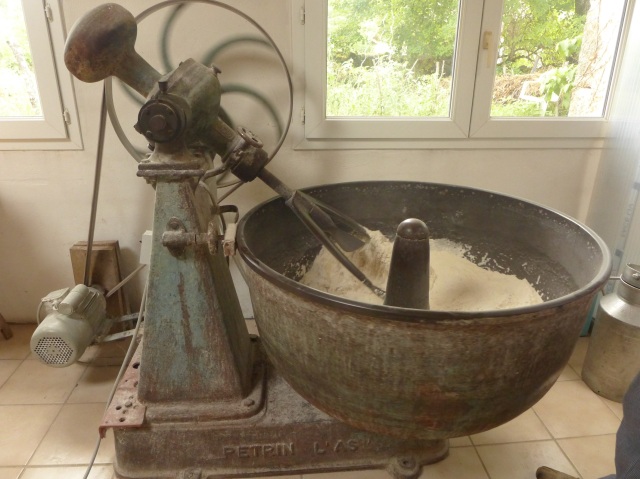 We used flour milled from various wheats grown on the farm kneading the dough in iron contraption that’s over 100 years old.

One of my duties was to get the wood burning bread oven to 300 degrees. It was hot work and to cool off we drank cold beers outside, overlooking Anka’s tomato plants. There Hubert told me about a cave beneath the farm where a friend – an amateur caver – discovered the skeleton of an elephant: He’d emerged after an afternoon in underground lakes and caverns with an elephant’s molar, that experts at a nearby museum confirmed to be from a beast that would have walked these harsh lands before the last ice-age.

The bread is delicious.

Meals en France are such a joy and I am sure there was a time in England when restaurants were affordable and unpretentious too; alas, not anymore. Only in France is the ceremonial formality of balanced meals – three or more courses and wine – combined with sensible prices. We dined at at a nearby auberg the other night, enjoying kir, a ‘pichet’ of wine, a salad, a meat entree, and dessert, for 22 euros. I wore the powder pink blazer.

Lunch today in Caylus, a hill town with bohemian shops, was even better;  sur la terrace, beneath a cloudless sky, with Asta curled up, and a priest wearing a crucifix so large it might have come from the church steeple. Three courses for 12 euros.

Our day had begun with another river swim. We were told peregrines live in the limestone cliffs, although we didn’t see any, but Chris spotted a kingfisher and Asta nearly caught a branch that Kim threw in the water.

Asta is endeavoring to make friends with the horses at the foot of the garden. She’s been temping them with well chewed plastic ice cream tubs and the remains of my baguettes. They’re not impressed.

With Saint Antonin-Noble-Val – like Padstow in August – heaving with holiday makers, we followed a dappled valley to a boot fair in Saint Projet. Shirtless men played boules on a sandy square. Kim bought a set of green and gold bone china cups and saucers for three euros.

As requested I have included some photographs taken with the LX7. I’m not much of a photographer and I’ll leave it to you to decide which of the baguettes was rolled and baked by your correspondent.

The weather has been uneven since the storm, but is nearly back to full strength, and I am tanned, although sadly back in shorts.

Tonight we’ll be sharing the pain aux noix and counting the stars once more.

This entry was posted in Dispatches from Tarn et Garonne, travel. Bookmark the permalink.