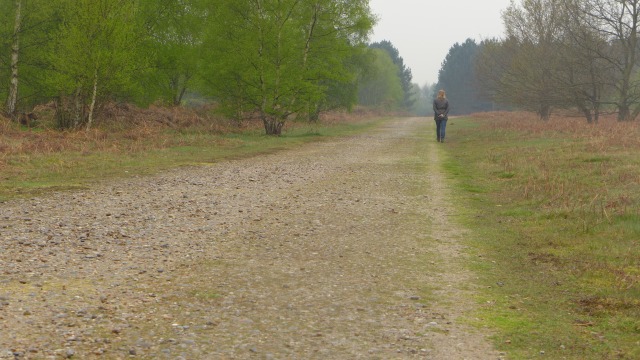 Dear Sir Kev,
I hope you won’t object but I thought of you the other day as a peloton of rangy cyclists in brightly coloured branded Lycra wear sped past the house where I was spending the Easter weekend. And at an ungodly hour before breakfast, with the sun still low and flickering through the conifers. I know you are a keen cyclist yourself, I think you said you recently pedalled to Paris, and I must say that Suffolk’s inordinately flat landscape, being able to see for hundreds, possibility thousands of yards in each direction, in the outer reaches of Suffolk where a chill wind rolls in off the North Sea, had me wishing I’d taken my vintage wheels with me, and joined the fun.
I spent many weekends in Southwold and Wablerswick in the eighties but with my home in Cornwall, diametrically at the other end of the country, it has been some time since I have made the long journey to the east coast. The invitation came from Di, whom Kim and I met on our honeymoon in Majorca. She has very recently shipped out of south London to a fine red brick house, with a garden large enough to play a test match upon, close to Woodbridge. She is as keen on lengthy woodland hikes as you are about arduous bike rides, but also being an enthusiastic and talented cook I suspect the sheer enormity of her new Suffolk kitchen, overlooking that magnificent garden, persuaded her to make the move.

The house is close to Rendlesham Forrest and as our sunset drew near I spotted a herd of maybe a dozen deer pushing through the bracken and conifers close to the house. While overhead a WWll fighter plane wheeled across the magenta sky lining up for a landing at either RAF Woodbridge or Bentwater. My good friend Rob Ryan would have known which of the two aircraft it was being an author of many excellent First and Second World War novels. He may also have known about the UFO sightings thereabouts in 1980, when both airfields were used by United States Air Force personnel. ‘Mysterious lights’ in the woods witnessed by dozens of military personal over a three day period has put the Rendlesham incident up there with the infamous ones at Roswell, USA. Locals hereabouts put it down to beams from Orford Ness lighthouse, or unusually bright stars. I am sure it is an easy mistake to imagine strangers from another world after a few USAF cocktails; with the land so flat and the sky so vast light here does seem to travel further and brighter.
Kim, Asta and I arrived late afternoon with the kitchen surfaces already cluttered
with ingredients for the first of several memorable meals: that evening it was fish pie, with purple sprouting and a hefty slab of Suffolk Gold cheese, the colour of that evening sun with a tangy aftertaste. Due to work another friend, Eleanor, couldn’t get away from London earlier and so joined us just as we were settling down to the log fire and Crosby, Still, Nash and Young. 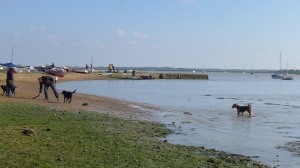 This part of Suffolk is bisected by the River Deben, an estuary running from Felixtowe to Woodbridge, a distance of some 12 miles, with low lying rapeseed fields fanning out on either side, punctuated by Norman churches and water towers. Kim and Asta and I walked part of it to Woodbridge passing communities of houseboats, some of them former military craft. Judging by the bulk of the boat skeletons jutting out of the water the Deben cannot be very deep here. There were ducks and swans and reed beds shifting in the breeze.
Woodbridge is a pleasant enough town. The Southwold brewery Adnams has a wine and beer store here, near the river, and up the hill, passing red brick and flint homes, the town centre has many estate agents, possibly sign that the property market is as brisk here as it is in London. Before returning to Di’s we took an aperitif at the Angel pub boasting 198 varieties of gin. I know, impressive. I was told they used to stock far fewer but because so many customers insisted having a shot of each, and were subsequently completely hammered, the owners, Chris and Sarah Mapey, decided to vastly increase the range so as to render drinking the lot impossible. Di and Eleanor joined us and had gin and tonics made with Ish, a London gin in a pink bottle, served with a tincture of juniper. It was by any measure, sublime. Lightly perfumed velvet with the kick of a mule.
That night Di served a game pasta dish. Venison, partridge and other beasts of the field, in a sturdy brown sauce and tagliatelle. She and Eleanor share a competitive streak in the kitchen and while Di wrestled with the game Eleanor knocked up a lemon meringue cake, that being a Nigella Lawson recipe utilised most of Suffolk’s Easter weekend supply of cream and eggs and sugar.
Turning left upon a road as straight as a laser beam took us to within yards of the North Sea. We had lunch at the Ramshold Arms, at the end of Duck Road, just feet from the Deben. While I ate a homemade hotdog, and nursed a pint of pale Mermaid ale, yatchs plied the choppy waters to Woodbridge, families spread out blankets, and dogs chased after sticks in the foreshore. There is a footpath walk past major earthworks, a sign that the area took a hit during the winter’s torrential rains. Overlooking the scene is All Saints Church. Inside the Norman flint rendered church there are rows of wooden box pews and a notice listing – according to the calendar – the dozens of wild flowers to be found in the church yard. You should take your camera there.

the gate all saints church ramsholt

Further east at Bawdsey, the site of a passenger ferry to Felixstowe, is the remarkable Bawdsey Manor. This overdressed confection of Flemish, Tudor, Jacobean, French Chateaux and Oriental design, with mullion windows, red bricks and slate, and onion domes, was a top secret research centre during WWll, the location of Britain’s first radar defense station. The iron radar tower remains and there is a museum.
Yesterday more friends arrived from London. There was a strange veiled light and a hint of sulfur in the air. As yet more cyclists hurtled past I was seconded to secrete chocolate eggs around the garden; hidden enough that Asta wouldn’t find them yet visible enough that Eleanor’s infant grandchildren could. Before lunch there was just time for a half of Black Shuck, a malty, twice matured ale, the young barman at the Shepherd and Dog Inn, at sleepy Hollesly, insisted was “very dark.”
After another good meal – locally produced lamb and a chocolate cake so rich it gives me the vapors just thinking about it – Richard (also from London) and I repaired to the garden for our Hoyo de Monterrey Epicure Especials, while Asta led the others across Rendlesham Forest.
I had only intended on being away one night, two at most. In the event it was three and nearly a fourth. I suppose that’s what friends, good food and a wonderful garden on the edge of a forrest where UFO’s have been sighted will do for you.

This entry was posted in Seashores, travel, Uncategorized. Bookmark the permalink.