You want to know the worst thing about the roller-coasters in Disneyland?

No, it’s not the white knuckle twists and high velocity turns, or the stomach wrenching plunges into an abyss. It’s the banks of photo screens as you leave each one where the terror you’d rather forget is there for all to see.

“Look at him,” shrieks a nipper beneath Mickey Mouse ears, as I stagger off Animal Kingdom’s Expedition Everest, with its torn up tracks and a section going backwards into a darkened mountain .

“He’s got both hands over his eyes,” he screams. They say the camera never lies, and the fear is etched across my face. I move away before he realises I am stood next to him.

A retired couple, friends of mine, come to Orlando most winters: “We like the sun.  We love the food. But most of all we love the sheer excitement. ” And they’ve got a few years on me. I resolve to try harder, and not be such a wuss.

Arriving at Mission Space – Rocket To The Red Planet fearless kids, and professional cowards like me, are inducted into a NASA space training programme. Four of us in harnesses and given on-screen instructions by actor Gary Sinise, who assigns each a role: I am to be ‘commander’, which feels about right. I am directed toward two yellow control buttons that Gary will instruct when to implement.

Commander! And you thought Disneyland was kids stuff!

I’d come a long way in the three days since checking into the Animal Kingdom Lodge hotel. Beyond its three storey reception, with a thatched roof held up by vast tree trunks, my room is decorated with batik prints, and African carved furniture. Throwing back the drapes reveals a savannah grassland stocked with real zebra, antelope, wildebeests, and flocks of sub-Saharan birds.  There is a look-out by the pool with military night vision goggles to watch animals close-up in the dark.

Fancying myself as something of a movie buff I head straight for Hollywood Studios, that resembles downtown LA circa 1940, with art deco cinemas and avenues of palms.The short film presentation, Walt Disney – One Man and his Dream is a delight, and puts Disneyland into historical perspective, and sets me up for Star Tours – The Adventures Continue. Upon leaving the in-house photographer uses a computer to transform digitally me into – Obi One Kenobi, complete with lightsaber sword. 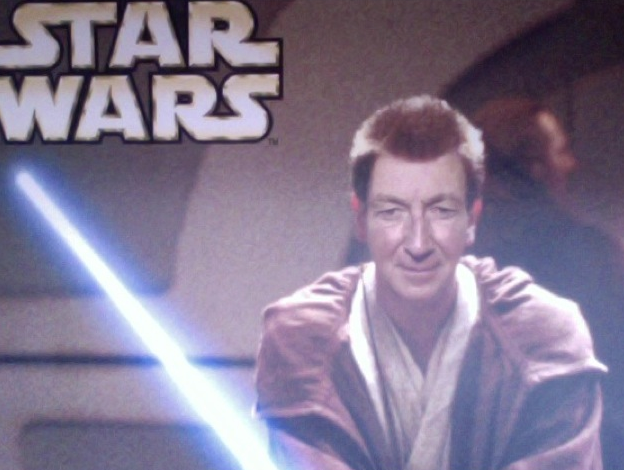 Having enjoyed the Duck Two Ways the night before at the Brown Derby restaurant (based on the original in LA) I am not sure how I feel when a larger than life Donald Duck sidles up to me during breakfast at Tusker House, a sort of fast food hunting lodge. Every time I try to put a piece of waffle into my mouth he wraps a wing around me and won’t leave until the ten year old at the next table, with an iPhone, has taken our photo.

For all the advertisements in the US about dieting – it’s not working. Many of the Americans in Disneyland are HUGE, like the meal portions. There is a diner at Kouzzina, in the Boardwalk Resort, with a tummy so enormous it looks as though he is sat at another table from his wife.

I shared a wagon on the Spaceship Earth ride with such a man: legs like hams and a tummy like East Anglia. We were to have enjoyed a tour narrated by Dame Judy Dench. But because I couldn’t reach across my companion (struggling with his backpack)  to select the correct language, we listened to the history of the media from the ancient Egyptians to the moon landing – in Portuguese.

Children understand fast food outlets, but it can take me a while to adjust. Splitsville Luxury Lanes bowling alley a case in point. Food – from burgers to sushi – is served at your lane, but I get into a spot of bother mistakenly helping myself to someone else’s tasty tacos. It’s easily done. A man with moustache, a body-double for a Mexican drug lord, is yelling, “he’s stealing our food”.

I’ve always fancied designing my own sports car – and at Test Track that’s exactly what you do – taking a simulated version of your creation on a overhead test track where the design cues, from engine to suspension, are rated.  On screen my car resembles a Batmobile. A sure winner. Wrong. There are a couple of brothers here, not in their teens, who have designed something with the aerodynamics of a front door. It wins hands down.

To escape their adolescent high-fiving I stop by the place with the least kids in all of Disney,  Senses Spa. It’s a short walk from the Grand Floridian Hotel, a weatherboarded palace in red and white: Over 1000 weddings are held annually in its waterside chapel.

I am welcomed at the recently refurbished, and Victorian themed, spa with a glass of freshly squeezed strawberry juice, and a carrot and coriander cup cake. I opt for the Swedish massage, although after looking in the mirror I think I should have opted for a Revitalizing Blueberry Facial.

Chilled and primed Mission Space – Rocket To The Red Planet turns out to be everything I’d hoped it would be – and more, a bit too much more. I enjoy the thrust of G force of take-off; glad I’d missed lunch. As Commander I press my yellow buttons on cue, but the ‘sling-shot’ around Mars, and the crash landing prove all too much. I feel sick and appreciate a helping hand to the fresh air from my young engineer.

Later I console myself at the the California Grill on top of the high-tech Contemporary Hotel, an upscale restaurant where the food is euro/asian fusion and quite delicious. It’s  the best grub at Disney,  and with a wall of glass has an unmissable bird’s eye view of the nightly fireworks display at Magic Kingdom.

My roller-coaster days may be behind me, but I still know a great creme brûlée when I see one.

This entry was posted in travel. Bookmark the permalink.