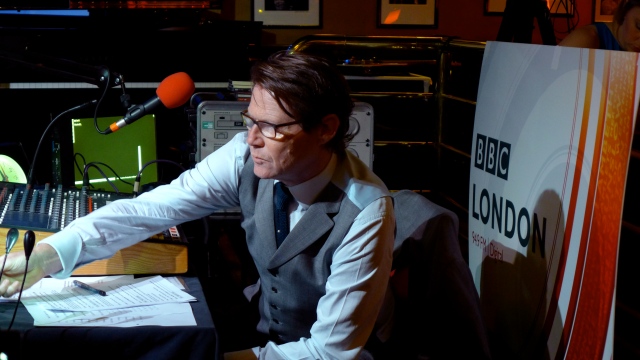 Robert – suited and booted for his birthday

What does it take to get Sir Paul Smith, Gilbert and George, Nick Lowe, Gary Kemp, and very nearly Rod Stewart, into the same Soho jazz club at the same time? The answer, were you not tuned into Radio London 94.9 on Friday, is the 20th anniversary of Robert Elms’ Monday to Saturday lunchtime show.

To celebrate, what by any reckoning is a milestone achievement – two decades unearthing the capital’s secrets, giving voice to its musicians, artists, writers and creative forces, and generally doing for London what its corpulent politicians can only dream about –  the BBC team chose to broadcast  the anniversary show live from Ronnie Scott’s in Frith Street, that iconic venue that has played a major part in shaping Robert’s lifelong affair with London’s underbelly.

In fact, our Ronnies seats (his and mine), on stools, our backs against the bar, directly in front of the stage, are, along with my season ticket seats at Fulham, are my most cherished seats on the planet – and believe me I’ve sat on a few gooduns.

Cuing the show in with George Benson’s Breezin’ Robert, suited and booted for the occasion,  observed “I’ve never seen Ronnie’s in the morning before, except in the early hours  when I’ve been heading in the other direction, and very drunk.”

He explained that when he’s started the show, on June 20 , 1994, for what was then Greater London Radio (GLR), it had been as a temporary stand-in. His intention was to turn London back on itself, engage with his listeners at every opportunity, and throw the spotlight on those creative Londoners who in the old broadcasting order would have remained unsung and unheard. To assist those tentative and uncertain early days he recruited some of his pals. Spike was arguably radio’s most eccentric film reviewer. He once reported live from a telephone kiosk in Cornwall, and on another occasion was offered the keys to Cartagena by an art house film club in Colombia.

My own weekly slot was Secret London. A twenty minute segment broadcast live – using a mobile phone the size of a shoe box –  from, well anywhere a bit quirky. I began with the house in N1’s Mackenzie Road that is festooned with decorations each Christmas; the owner, a hospital porter, builds a santa’s grotto above his fish pond. Another broadcast was from the top of Canary Wharf (literally outside as it was being built), and my own favourite, Dennis Severs House in Spitalfields.

The three hour birthday broadcast, with an audience of regular listeners – ‘Pete from Acton’ as he is known was photographing the event as a favour – and family and friends – Kim and I sat with Bob’s wife Christina and our godson Alfie – was an affectionate, often funny, and sometimes moving collection of London anecdotes.

Sir Paul, who shares with Bob a passion for cycling, gave a condensed history of his company from the initial four story building in Floral Street, without stairs, that opened  in October 1979 when I recall Covent Garden being derelict with homeless people and open braziers on many corners. He said he doesn’t know how many stores he has today, but that there are 265 in Japan.

Of course Bob is known for naming Spandau Ballet (he confessed to stealing the name from the wall of a public convenience in Berlin). He and the band’s leader and songwriter Gary Kemp have been friends for years, going back to the fashion excess of the New Romantic era. The Spandau frontman paid his respect with a stirring acoustic version of Chant Number 1 (I Don’t Need This Pressure On). Gilbert and George, whom Bob and I know from our frequent meals at Dalston’s Mangal ll restaurant, were tweedy and effusive: 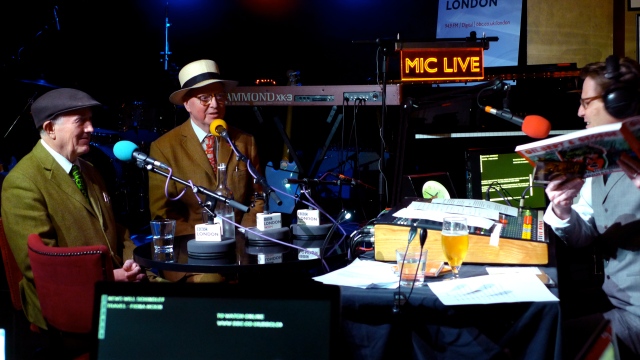 Robert with Gilbert and George

“Go on, said Gilbert, the short one, “tell him your joke.” Upon which George, the tall one, related an encounter with a “skinhead lorry driver”, who upon leaning out of his cab called to London’s tweediest artists, “my life is an effing moment – your art is an eternity.”

Rod Stewart, along with Queens Park Rangers, Savile Row suits, and lager tops, is another one of Bob’s life essentials. He often plays Rod and Faces tracks on air, the singer from Archway listening on the internet from Los Angeles. Rod called in from a traffic jam on the Embankment to apologize for not being able to attend – “I gave it my best shot” –  explaining that he was due in Blackpool that evening for a concert and was concerned he wouldn’t make it if he made a detour.

He did reveal though that he would be moving back to the UK shortly. “So my kids can grow up here.” Thanking Bob’s listeners for buying his music “and keeping my children in shoes and pencils.”

Nick Lowe, whom Bob has championed for as long as I remember, introducing the singer and songwriter as the ‘Bard of Brentford’, performed two songs, Love Is A Battlefield that he wrote for Diana Ross, and an achingly spellbinding Alison that first saw the light of day on Elvis Costello’s My Aim Is True album. I like Nick Lowe on record a lot, and live and unaccompanied at Ronnie Scott’s he is immense. His voice resonating longer and deeper than any other matinee singer I know; a craft he has being honing these past ten years or so.

Between the songs and the jokes Bob reminded us of how his show handled with the events of 911 and 7/7, a tornado in Kensal Rise, the Olympic Games, and in a tearful moment the day his late mother Eileen telephoned the show to wish her son a happy fiftieth birthday.

And that’s what twenty years of the Robert Elms show is all about; a family affair – for all of London.

This entry was posted in London, Uncategorized. Bookmark the permalink.