Last Orders At The End Of The World 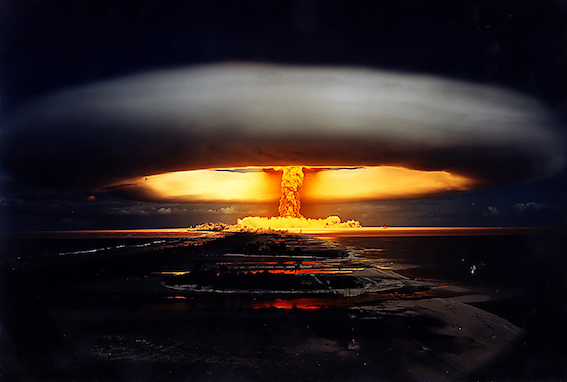 There’s nothing quite like the imminent end of the world to focus one’s thoughts on food. Long before Kim Jong-un and Donald Trump the father of a school friend of mine set aside a bedroom in the large detached family home in west London to store the bare necessities – should all hell break loose. Within a five foot tall pile beneath a white sheet in the centre of the room were sealed crates of baked beans and tomatoes, jars of pickles, biscuits, enough tea and coffee for an army, dried eggs, bundles of spaghetti and enough lavatory paper to maintain family hygiene standards for some time. Why John Tallent chose to stash these items away we never knew, although as a source of late night snacks the bedroom pile couldn’t be beat.  This being the early seventies it was, by current MAD (mutual assured destruction) standards, a reasonably stable world. Vietnam was a long way off and nobody was talking nuclear. Certainly the of threat of armageddon had dissipated since the nervy days of October 1962 and the Cuban missile crisis. Then the world held its breath following the discovery of Soviet warheads 90 miles from the Florida mainland. “We didn’t know if having gone to bed we’d wake up in the morning, that’s how close it got,” said my mother, who resisted the urge to fill her cupboards with  Cote D’Or praline chocolate elephants and Vesta curries. No, I suspect Tallent Snr’s bedroom stash had more to do with what he perceived as an end of life as we knew it due to the seemingly unstoppable influence of the British union movement. After all there had been the three day week, mining and refuse collection strikes, and frequent electricity blackouts. As a result the nation had been gripped with the notion of self sufficiency; shelves of survival books and novels like Doris Lessings Memoirs of a Survivor, and the television series The Good Life, set in Surbiton, in which Richard Briers and the sublime Felicity Kendall upset their posh neighbours by keeping pigs and growing their own veg; in contemporary parlance – doing their own thing.

The truth of the matter is food, more than millions of dead people and no means to recharge our phones or cars will be the priorities if things turn bad between the North Koreans and our special relations in Washington. According to experts each of us is nine meals from anarchy. This the number of meals that could be cobbled together with bits in the backs of our cupboards combined with anything we can loot from the local supermarket.

Opinions differ on how long any of us could survive without food. Mahatma Gandi, already a waif, went 21 days without sustenance. The IRA hunger strikers hung out for much longer. But what would sustain you if there was no end in sight for starvation. No food production and distribution, not forgetting a nuclear ‘winter’? The issue  was examined by Cormac McCarthy in his 2006 book The Road. A film version starring Viggo Mortensen came out two years later that I’ve never seen not wishing to be reminded of what could be one of the most unspeakable consequences of global starvation and anarchy.

Barely a day goes by without some wag hereabouts remarking that there may not be any point concerning ourselves with the effects of Brexit or the fall in the value of the pound or the lack of affordable housing. The War of the Stupid Haircuts looms ever larger: Kim Jong-un firing missiles over Japan and detonating nuclear bombs underground and Trump warning of ‘fire and fury like the world has never seen’. “There may not be a next year to worry about,” is phrase resonating in the pubs around here.

All of which leaves me in the local supermarket adding non perishable groceries for dinners at the end of the world. I already have one shelf of a kitchen cupboard nearly full. In case you’re wondering there are lots of tinned new potatoes, flageolet beans, mushy peas, sweetcorn and Ancona hot sauce. You’ll just need to provide your own loo paper.

This entry was posted in health, shopping. Bookmark the permalink.

2 Responses to Last Orders At The End Of The World