Kim and Sally at the Victoria & Albert Museum

Everyone is very excited because later this month one of Kim and Sally’s ‘yukata’ and ‘obi’ designs outfits, produced when they were the Bentley & Spens textile design partnership, is to be featured in Kimono: Kyoto to Catwalk an eye catching oriental fashion show at London’s Victoria & Albert Museum. 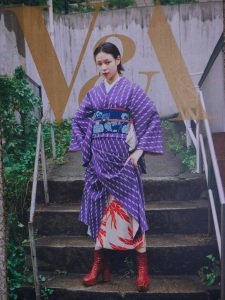 The exhibition- running from Saturday February 29 to June 21 – is a celebration of the iconic Japanese kimono tracing the antecedents of this defining garment back to the 16th century whilst reflecting upon its influence and inspiration for a raft of 20th and 21st century fashion designers.

Kim (Bentley as she was) and her design partner Sally Spens (latterly Murdoch) met studying textiles at London’s Goldsmiths College.  Working together as Bentley & Spens their often intricate and colourful hand painted and batik designs drew favour from clothing and interiors outlets from London, to New York, and Paris eventually coming to the attention of Japan’s foremost Kimono production company, Kawashima. The vitality and romanticism of Bentley & Spens’ work it intended to use in a range of less formal lightweight summer kimonos known as yukatas – de rigeur for chic women at the nation’s popular and season defining cherry blossom festivals. An ‘obi’ is the waist belt or band. 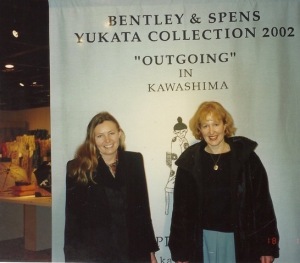 Kim and Sally were flown out to Tokyo for the launch (see adjoining photographs), taking the Bullet Train to Kyoto to meet the production staff at the factory. During the subsequent six years they supplied around 80 original yukata designs.

This entry was posted in London, media, Uncategorized. Bookmark the permalink.