Never Not Never Go Back – a taste of Viareggio

My life is one of stringent rules: Never wear aftershave; always polish my shoes; stand up for elderly people and women with young children on the London underground; never vote tory; spread the jam on top of the cream upon a scone; never buy from Amazon; and never stay at the same holiday hotel twice. Of course there are others but it is the last one that I have just broken, resulting in an extraordinary and most gratifying turn of events.

After the upheavals of my recent, and possibly over reported and seriously unedited, illness Kim insisted we have a holiday (I think she needed one more than me).  As I am incapable of making snap decisions where significant sums of money are involved, and because modern travel is a pitfall of scams and complications, we decided to contact Citalia the Italian vacation specialists who took us to Rome and thence to Tuscany three years ago. That holiday was a two centre one commencing with four nights b&b in Rome followed by three half board at The Grand Hotel, Viareggio in the heart of the Italian Riviera. It couldn’t have been simpler or more stress free.

What we liked about The Grand Hotel, an imposing fin de siecle structure just yards from the infinite sandy beach and a shopaholic’s Eden of fashion boutiques stretching north and south for as far as the eye can see, is it’s faded elegance and apparent determination to be nothing more than an unpretentious, effortlessly run if rather large seaside hotel with a dash of resplendence. There is nothing groovy in its echoey corridors with 20 foot ceilings and tiled floors and staircases wider than most living rooms. I particularly like the evening dining room across from the cavernous reception facing the garden and pool. With pillars and a domed ceiling it had been a ballroom in an earlier life. Smiling waiters in waistcoats glide silently between the tables overseen by a sharp eyed maitre’d. And the food whilst unlikely to win any prizes is that classic global Italian I can’t have enough of.

For the first three nights, as on our previous visit, Kim and I avoided the comfortable and slightly clubby cocktail bar that leads to a small terrace protected from the street by a tall hedge. Neither of us were keen to make holiday acquaintances much preferring our company to that of those who think dressing up for dinner is wearing sneakers and a short sleeved checked shirt, tucked into cargo pants.  But by Tuesday I fancied a cigar on the terrace and decided to bite the bullet: I can be agreeable if I try.

The only cocktail I drink – as a rule – is a vodka martini, straight up with a twist. If you’ve seen the films you’ll know where that comes from. It’s a simple enough concoction that when executed well delivers the perfect early evening punch. Few get it right: One at Rick Stein’s Ruby’s in Padstow was made with smoked vodka with the aroma of a bacon sandwich; another at The Groucho Club ameliorated by ice; most are simply tepid, in both taste and temperature. Few come even close to those  once crafted by the now legendary barman Gilberto Preti at Dukes Hotel, tucked away in London’s S.James. With non of the silly showmanship some cocktail barmen feel obliged to display the school masterly and ever so slightly obsequious Gilberto created martinis that are spoken of today, a decade after he left.

Our barman at The Grand Hotel, Mario, tanned and erect, nodded and having agreed that basic Stolichnaya vodka would do he set about his task that he accomplished with some aplomb. The martini was good, maybe not quite cold enough, but it had just the right hint of vermouth with a citrous bite. Before we left for dinner I held my nerve and asked Mario if for tomorrow’s martini he could put the glass in the freezer beforehand. He explained that the glass had indeed been frozen but that the bar freezer isn’t that chilly. For tomorrow he’d put the glasses in a much colder freezer in another part of the hotel, along with the vodka if I’d like. Very much I concurred.

Viareggio is 28 kilometres from Pisa airport, served by EasyJet from the UK. In typical Citalia fashion a chauffeur awaited Kim and I in the arrivals lounge and both carrying and wheeling our luggage led us to a black S Class Mercedes. Holidays should always start this way.

The room I had booked was on the third floor with 16 foot high ceilings and a small west facing balcony from which we could see the boutiques and cafes that create at night an art deco Miamiesque illuminated barrier between the wide promenade and the hundreds of beach clubs with their multitude of  deckchairs and beach parasols beyond. The seafront and hinterland is flat for miles with a smooth and well used cycle path connecting Viareggio’s super yatch and fishing harbour with other resorts in the lambent distance.

Kim and I rented sit up and beg bicycles from the hotel on our last day to explore the coast.

We ate fried seafood and drank chardonnay from a fish-fry boat in the harbour where the fishmen sell there catches on the pavement and in the afternoon we pedalled north to the grand mansions of Forte Dei Marmi.  There is a station in town and on the Monday we took a day away from the rain and headed for Florence – and even more rain. For the rest of the week we rested and read at the beach club opposite the hotel where our admission was part of the package.

The night after that first martini Mario nodded as Kim and I took our seats inside the bar, it being a bit breezy on the the terrace. He nodded again, as though acknowledging some forbidden protocol, when the waitress handed him our order, and duly departed, I presumed to the other, colder deep freeze. 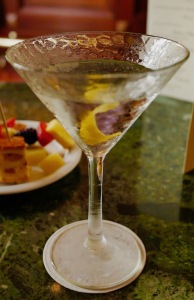 straight up with a twist

That first martini had been good but nothing could have prepared me for the second coming. It was simply sensational. Mario had excelled himself. The frosted  glass yielded a martini with a gossamer thin slick of vermouth on its surface. It set my pulse racing and was without doubt the best martini I’ve had since Gilberto’s. Tell him said Kim sensing my jubilation. I shall I said, and I did, upon which Mario, bowing faintly, confessed he’d be taught how to mix the perfect vodka martini straight up with a twist of lemon by none other than the maestro himself, the venerable Gilberto Preti, the leading man in many cocktail articles in the UK national press and the star of a short film on boutique hotels I’d hosted during my short term as a BBC Travel Show presenter. I almost fell backwards in disbelief. Of all the vodka joints in all the towns in all the world he mixes in the one I never thought I return to.

Mario explained he’d lived in London for a short time some 20 years ago improving his cocktail skills – and some – and polishing his English.

The fact that an hour or so later our young dinner waiter Marco persuaded the chef to go off piste and serve me with a second creme caramel that week (he made it three on our last night) makes me wonder if my no return rule should be ripped up forthwith.

The Grand Hotel in Viareggio isn’t called grand for nothing.

This entry was posted in Seashores, shopping, travel, Uncategorized. Bookmark the permalink.