getting ahead at Port Eliot

I was surprised at how much I enjoyed what may easily be the very last Port Eliot Festival.There was a look and feel and smell amid and among the rolling grounds, woodland and elegant Port Eliot House and gardens that reminded me of the last festival I attended, on the Isle of Wight in 1970. I daresay some of this mutuality could be down to the fact that a good number of those in St.Germans the other day, just inside Cornwall, and a short walk from the splendid Tamar Valley, were themselves on the Isle of Wight when Jimi Hendrix delivered his final UK performance. Don’t get me wrong, the majority there were much, much younger than I, but at the same time it was one of the few events I have been to in recent years when I wasn’t mistaken for either a mini cab driver or doorman. Indeed my only age issue was an barman at the rioja bar wondering if my eyesight was up to reading the menu on the wall behind him. Aside from that it felt as ageless as could have hoped for.

I am put of offer multitudinous outdoor popular culture events for a number of reasons, not the least of which are toilet and food queues niggles that were for the most part ironed out at Port Eliot where the plentiful loos range in quality from (if you’ll excuse the pun) bog standard to expensive luxury. As for the food I have never before been confronted by such a global mouth watering variety beneath a sun soaked cumulous sky. There was Turkish and Thai, Chinese and Cornish, meaty and fishy, vegan and Italian, shell fish and sushi, and for me the best French toast, dripping with maple syrup, outside Manhattan’s Lower East Side.

I was there to accompany my friend Robert Elms who had made the trip west to conduct a sort of literary Q&A on the subject of his recent book London Made Us with a music writer Will Hodgkinson. 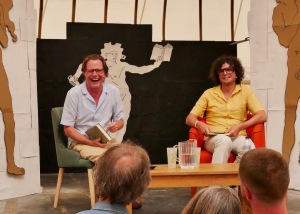 He was a little apprehensive before, unsure of who his audience would be, especially as the book is tightly London focused. Over two brews I attempted to reassure him that there are also people of reasonable intelligence in the west country who not only read avidly but had even heard of London. Some of them may even have been there, or like myself come from there.

Upon reflection I think I enjoyed Port Eliot because there weren’t aimless and headless hordes there to worship rock and pop star celebrities of varying ability, there instead to listen to writers discussing their books, like Robert, and the process that led them there. Some of them recognisable celebrity writers – a news reader, a couple of comedians, and a singer  – but in the main the stars of the festival were writers and journalists of every calibre, even including one I trained with on a newspaper in Uxbridge in the 1970s.

The sheer range and breadth of creative skills and crafts to be learnt  there was inspiring – if one were organised enough to prebook – including pottery, printing, design, carpentry and even ukulele lessons. Within the 12th century Port Eliot House, crenelated and mullioned and remodelled in the 17th and 18th centuries, home of the now deceased Lord St Germans who began the festival in 2003 – was a small Sandra Rhodes exhibition and lectures, discussions and workshops on fashion.

Romany caravans, campers, mud bathers, mad hatters, brewers and bejewelled bohemians on stilts combined to provide a 19th century carnival atmosphere where a good many made the effort to (in immortal the words of Dave Crosby) let their freak flags fly. After the quagmire of 2017 the warm sun-bathed weather helped, making for a joyful, colourful, eccentric experience with I’ll wager few, if any, Brexiteers in attendance. The organisers like to describe it as ‘magical’, which on that perfect July day, with hair and peignoirs, bippity bobbity hats, streamers and unbounded consciousnesses fluttering in the breeze was hard to deny.

Robert’s thing went well. Far from being the fish out of water he feared the crowded Bowling Green Tent where his do took place contained a good many familiar with his BBC Radio London programme. He had them in fits and was henceforth glad handed warmly by admirers all afternoon.

It was touted as the last ever festival to be held there owing to a dispute among the former lord’s heirs. I hope they settle their differences and stage another – for all our sakes.

This entry was posted in gone west, media, travel, Uncategorized. Bookmark the permalink.